HonestReporting states that UNRWA (United Nations Relief and Works Agency) is "infected with terrorists who use international funds and UN safe havens to facilitate attacks on Israeli civilians." Their communique then lists eight separate incidents in an attempt to demonstate this UNRWA link to terror, yet not one of HonestReporting's claims about UNRWA holds up to even the most mild scrutiny.

Here are the eight incidents that HonestReporting lists in its communique:

1. HonestReporting includes video footage taken by a drone that Israel initially claimed shows a Qassam rocket being loaded into a UN ambulance. The video shows a man wandering around rather aimlessly while carrying a long thin object with one hand. Near the end of the video, he shoves the object in the back of a UN ambulance.

UNRWA responded with the following press release in which they state:

"the object carried and thrown into the vehicle is not / cannot be a Qassam rocket: I have been told that a Qassam rocket weighs at least 32 kilogrammes and that its diameter is approx. 17 cm. On neither count does the object shown in the film correspond in the least to this description: it is much thinner, longer and obviously much lighter than a rocket. In my mind and in that of those whom I have consulted, it is clearly a folded stretcher, a logical and indispensable accessory in any ambulance."

The government of Israel must now agree with UNRWA's assessment because the Israeli Foreign Ministry recently removed this bogus video from their website. HonestReporting should either do the same or label the video accurately - someone carrying around a folded stretcher. It's shameful that this discredited video is still prominently displayed in their communique.(1) 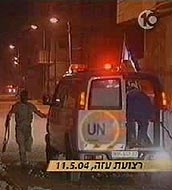 Yet, two days after the incident (May 13, 2004), UNRWA issued a statement explaining exactly what was happening when this photo was taken.

"armed Palestinian militants threatened the lives of an UNRWA ambulance team (a driver and a paramedic) and forced them to transport an injured gunman and two of his armed colleagues to a hospital in Gaza City ... UNRWA condemns this action in the strongest possible terms."

For HonestReporting to publish this photo without an accurate description is extremely deceiving and an embarrassing disservice to their readers.

3. HonestReporting continues that "possibly, remains of fallen Israeli soldiers in Gaza" were carried in UNRWA ambulances. In a press release, UNRWA states:

"a few months ago, two Cabinet Ministers declared in public that UNRWA ambulances were carrying body parts of fallen Israeli soldiers. When challenged to produce the evidence backing up this claim, or to retract the statement and offer an apology, the Ministers in question were not able to provide any response and have remained silent. ... there was not a shred of evidence to suggest that the claim had any basis in fact."

4. HonestReporting states that in Sept 2003, an Israeli court "convicted three UNRWA employees for terrorist activities (such as throwing firebombs at a public bus)." Unfortunately, HonestReporting's communique doesn't include the names of the convicted or a link that could be used to verify this claim. I have no idea whether this is true or not, but consider this: UNRWA employs over 25,000 people. Such a minuscule percentage resorting to violence outside of work, hardly justifies condemning the entire UNRWA organization.

5. HonestReporting then claims that in Sept 2002, a UNRWA official admitted to "using his UNRWA car for the transportation of armed members of Fatah". About this incident, UNRWA stated:

"UNRWA has not been given relevant details, such as the alleged dates, by the Israeli authorities. Weĺd like to investigate, particularly as the staff member in question did not have regular access to an UNRWA vehicle. The confession he signed was in Hebrew, a language he does not understand."

6. In August 2002, HonestReporting states that a "Hamas member and ambulance driver employed by UNRWA, confesses to transporting weapons and explosives in an UNRWA ambulance". UNRWA states:

"Since October 2000 to-date, and even though hundreds of UNRWA staff have been detained and subsequently released, only two named individuals have been brought to UNRWAĺs attention. One only appeared in the Israeli media. He is an UNRWA ambulance driver who supposedly admitted to moving weapons in his ambulance. This is a man who was held without charge by Israel and then released in late 2002 - an unlikely turn of events if there had been any evidence against him."

7. HonestReporting includes a claim that in Feb 2002, a Tanzim member confessed to carrying out a sniper shooting from a school run by UNRWA. He supposedly also stated that "bombs intended for terrorist attacks were being manufactured inside the UNRWA school's facilities".

This is another false claim by HonestReporting because, as UNRWA specifically states:

"Only once in 52 years has there been credible evidence that UNRWA installations have been put to misuse and that was in 1982 in Lebanon in the midst of the civil war." and that "From 1967 to-date, UNRWA has not received from the Government of Israel any complaint related to the misuse of any of its installations in the West Bank and Gaza Strip."

8. HonestReporting mentions a Shin Bet report which claims that numerous UNRWA facilities "had been used by Palestinian terrorists as meeting grounds and for weapons storage."

A simple link to this Shin Bet article would have made this claim more credible. I've spent time searching for this report and haven't been able to find any that make either of these claims. In any case, as UNRWA stated above, during the last 37 years they have not received any complaints from Israel about the misuse of any of their facilities in Gaza or the West Bank.

For HonestReporting to speak of "the infiltration of the UNRWA by Palestinian terrorists" is nothing but a sad joke.

(1) Update: I'm speechless. After about a decade, Honestreporting has finally removed this discredited video from their website, however it was apparently too difficult for them to completely distancing themselves from it. They've now updated their article to state "with some claiming that footage from an airborne drone ... shows Palestinian terrorists hiding a Kassam rocket in the vehicle." Fake news, anyone?